Price:  over $15,000 if purchased outright, less if “sponsored” purchase: Buyer agrees to train and compete this horse in a suitable discipline, such as endurance riding, representing Rancho de los Cielos, with breeding rights maintained by Rancho de los Cielos

Avatar was bred to be either the flagship for the ranch, establishing our ranch in the limelight of competition in an appropriate discipline for us, or to take his full brother’s place as the chief breeding stallion in our program. He was a leggy, confident, inquisitive foal, who became a lean, long, elegant stallion, classically batida at liberty. He transitions from animated walk to picada before reaching his batida under saddle. He took well to training but still needs hours under saddle to solidify his comfort working in groups with other horses. He approaches people with calm reserve, affectionate but not importunate. He shows unique patience at the right times, like around older people and children, or like holding especially still to let someone escape their clothing caught in his tack. His physique, his gait, and his character make him uniquely suited to endurance, but he’s demonstrated a jumping talent at liberty that might portend a hunter-jumper career. Especially in endurance, he would find more venues for competition as a gelding. Before we did that, we wanted to see what his children would look and gait like. His first foal, a son, was born 10 weeks ago, seems likely to share his parents height and already promises to gait better (with the modern,more animated, bicycling movement of the front legs) than either parent. We still want to see Avatar be our flagship. We are offering him for straight sale or as a candidate for sponsorship, as described above. He could be sold as a gelding. 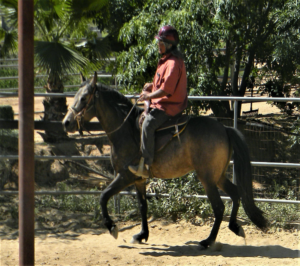